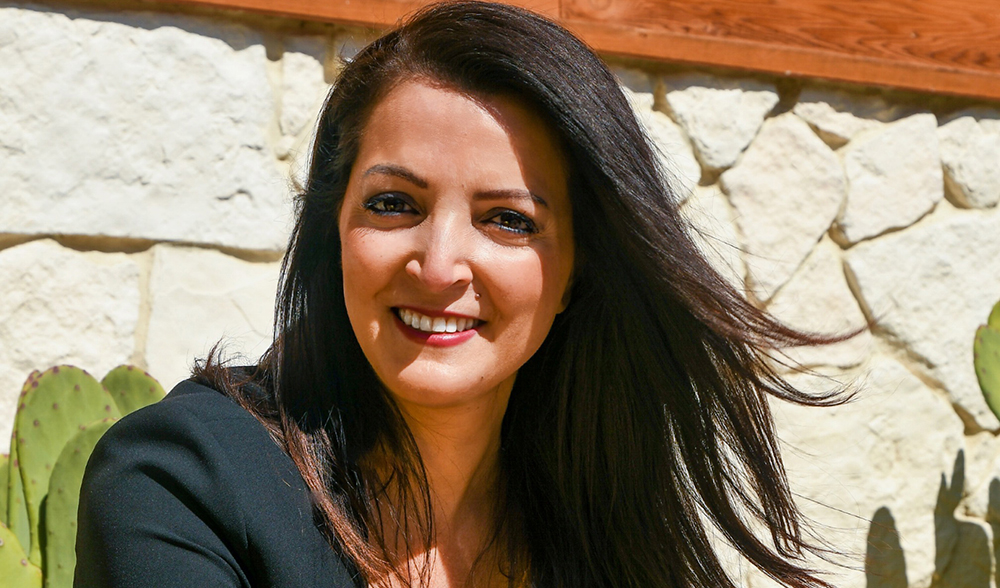 Adiba Barney has made an exceptional journey from Swedish start-ups to CEO and Leader in Silicon Valley after graduating from the International Marketing Programme at Mälardalen University. At the same time as she fulfilled her dreams, she has grappled with cancer over many years and today uses her marketing skills to raise more money for metastatic breast cancer research. With her newly published book “När livet ger dig kaktusar, gör margaritas!” (When life throws cacti at you, make margaritas!) she wants to inspire others to live life to the full, even when things are really tough, and to dare to dream big.

“In many ways, I have had a fantastic life despite the challenges I have faced along the way. Among other things, I have had a successful and inspiring career, experienced love, discovered the world and met many incredible people. I also have a wonderful family and friends who have always been there for me,” says Adiba and continues:

“I believe and hope that others can be inspired by my journey and find a way to deal with their own challenges in life.”

As a young girl, Adiba's dream was to get an education in marketing with the goal of becoming a hotel manager at one of the top American hotel chains. To get there, Adiba was required to get permission to leave home as an unmarried woman, which was not allowed in Syrian culture.

“I started preparing my parents early to be open to the idea that I would have to leave home in order to study at university or university college, because there were no university colleges in Lidköping where I grew up,” says Adiba Barney.

Discovering tech and the start-up world

Adiba managed to bring her parents with her, and her dream of getting educated finally came true. That she chose Mälardalen University (MDH) was partly because the programme she wanted to study was available there, but Adiba also saw benefits of studying in a smaller city and at a smaller University. It would soon become apparent that the decision to study at MDH would change her life and point it in a new direction.

“I will always be grateful that through MDH's close links with the private sector, I also found my passion for technology and innovation,” says Adiba.

It was through her work with the Student Union's Business Advisory Committee and the labour market days that she encountered Teknikbyn that MDH collaborated with.

Teknikbyn opened up a whole new world for me. I was introduced to several cool technology companies that were started in conjunction with the new economy and the Internet boom was well on the way to changing the entire world market. It was exciting to be a part of this period and important to experience it in practice because the textbooks had not yet been updated with information about this new crazy economy,” says Adiba.

During her education, Adiba also gained insight into the world of which companies were a part of.

“There was a connection between theory and reality already then through the many inspirational business leaders, entrepreneurs and researchers who came to MDH as guest lecturers and lectured to us students. For example, I will never forget when I got to listen to and then interview Philip Kotler for the Student Union TV,” says Adiba.

Professional experience already during her studies

Adiba started working in parallel with her studies and gained valuable work experience from start-up companies that were part of Teknikbyn. She led an IT company through the Kompetenspoolen recruitment company and project led Teknikbyn Trade Fair, which aimed to highlight the opportunities of Teknikbyn to the public and the private sector. Her experiences from Teknikbyn, along with her knowledge of marketing from the International Marketing Programme, led her to receive an offer of employment after graduating as Marketing Manager for Kista Science City and start-up incubator Kista Innovation and Growth, later called Stockholm Innovation & Growth (STING). The role model was Silicon Valley with an aim to create a brand name that positioned Kista and Stockholm as the obvious location to attract international investors and companies to Kista.

“I have largely been driven by passion and doing what I love. And I really love innovation, the tech and start-up world and of course marketing. It suited me as a person perfectly,” says Adiba.

Adiba's belief in herself has also given her the courage to take on new assignments, start her own business, sell and implement an innovative concept aimed at highlighting Sweden as an innovative country abroad, for the Ministry for Foreign Affairs and the Swedish Institute and taking on CEO and leadership roles in Silicon Valley.

“I've always believed that I know enough to be able to take on new tasks. The rest I learn along the way. With the right attitude, you can go a long way and you don't have to be an expert,” says Adiba.

As a young, recently graduated student, it is easy to doubt your knowledge and yourself. Adiba therefore advises students to engage with the private sector already during their studies.

“It will provide you with valuable contacts and an opportunity to apply your theoretical knowledge to the practical work. Also, don't be afraid to say what you believe and think. What exactly is the worst that can happen?” says Adiba.

Adiba is fearless as a person, but she believes that it has also come from experience.

“Over the years, I have learnt to understand myself and my strengths and weaknesses. It makes me both more confident in my professional role, but I also know how to promote myself and what I can contribute with. I started thinking about myself early on from a personal brand name perspective,” says Adiba.

Life has also brought adversity. At the age of 27 and long before she moved to Silicon Valley, Adiba was treated for early-stage breast cancer, not only once but twice. A cancer that would later return as stage 4 which had spread to her bones, making it incurable and fatal.

“My main challenges in life have been cancer, but also that I have had difficulty having children and that I have grown up between two cultures and experienced racism,” says Adiba.

She eventually had her son Alex and the challenges of being an immigrant she has turned into a strength. But what is it that gives her such strength?

“All the experiences I have gone through in my life have led me to build up an arsenal of tools to deal with life’s challenges. I think everyone has tremendous strength in them, but that it is only when you go through something really tough in your life that you realise how much inner strength you have,” says Adiba.

Adiba's margarita ingredients will empower you for life's challenges

The book's title “När livet ger dig kaktusar, gör margaritas!” (When life throws cacti at you, make margaritas!”) alludes to the two sides that Adiba identifies with. Partly the cactus that has an outstanding ability to survive and thrive in challenging environments, and partly the margarita that symbolises her love of life and all life’s adventures. Here you can enjoy four of the book's eight margarita ingredients:

In my professional life, knowing my self-worth and believing in my own ability to make things happen has led to people around me also believing in me. This has clearly been a decisive reason for my success in most things.

Don't let your fear stand in the way of living and fulfilling your dreams or seeking that job that you really want. Also, don't be afraid to fail. Failure can provide you with a lot of lessons and you will discover parts of yourself that you didn't even know about. You realise suddenly that you can do so much more than you thought you were capable of.

By unfuckwithable I mean that I am really satisfied with myself and nothing anyone says or does will affect my self-image and self-worth or put me down. This mentality helped me as a young, immigrant woman in the technology and start-up world in Sweden and also later as CEO in Silicon Valley. It is simply a matter of standing up for yourself and not being afraid to take your place and be heard.

I am motivated by empowering others and helping others achieve success. It is important that you find what you are driven by and ask yourself before accepting a job - what is it that motivates me? It's so much more fun working with something that motivates you and usually leads to you becoming more successful in your job.