Honorary doctor and nurse: here’s how Gunilla is changing the world 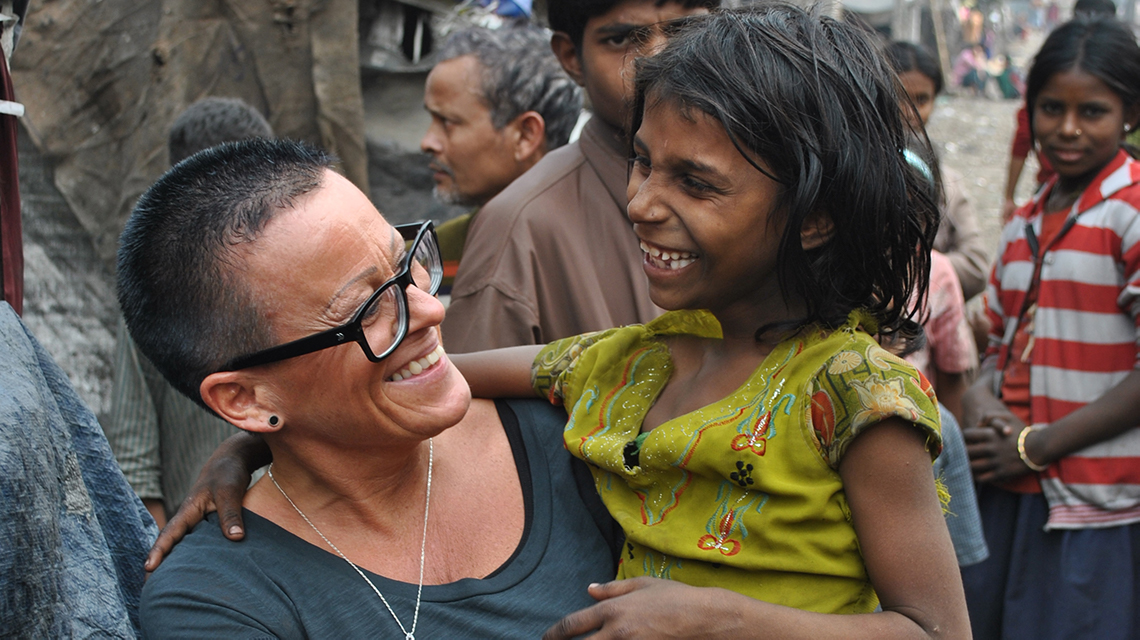 Gunilla Lööf is an honorary doctor, researcher and nurse who is driven by insatiable curiosity, joy and a conviction that nothing is impossible until all roads have been tried, despite the fact that the road is not always obvious and perfectly straight. On 23 April 2020 Gunilla will be given special attention during the Honorary Doctors’ Day.

− I am convinced that all of us have the opportunity and ability to implement a change or an idea. It’s a question of daring to believe and to go for it. Nelson Mandela’s words ”It always seems impossible until it´s done” is my compass in life, says Gunilla Lööf, honorary doctor at MDH.

As a founder of the Narkoswebben, Second Chance Medical and Kasitan go to school as well as being involved in the start of the Operation Smile Sverige, Gunilla has thorough experience of driving projects and having the courage to invest – all around the world, with her heart and soul in every project.

− As a child I was afraid and anxious, but this is something that has disappeared for every small step forward I’ve taken. All ideas begin with a thought. We need to take the plunge, test new things and think that it’s quite okay to fail sometimes. This is how we go further and drive developments forwards – ”Don’t follow your dreams, lead them,” says Gunilla.

Today Gunilla is driving her projects in Rwanda and India, among other places, but also works in greater parts of the world.

− To succeed in carrying out a project it’s a matter of having people around you that have done and can do what I myself don’t have. You have to be able to see and enhance other people’s resources and then build up a ”dream team” with collected skills and personalities and also to be able to trust one another. All my projects are built on people having faith in people, says Gunilla.

Carrying out a project or a change is about daring to invest and take risks and also working really hard to make your dreams work.

− Success can’t be taken for granted so it’s important not to be afraid of failing either. If you do succeed it’s an enormous boost for your self-confidence to see the project developing, says Gunilla.

The nurse who ran away from her own operation

Studying to be a nurse was not an obvious choice for Gunilla, despite her mother working as one. In her younger days she was terrified of hospitals and ran away from her own operation.

− I had dreams of working as a music teacher, trained and worked as one for a few years before realising it wasn’t anything for me, says Gunilla.

After trying out the music teaching profession she nevertheless decided to apply for a nursing programme on the final application day - it was a choice she does not regret today.

− At upper secondary school I read the nursing programme to be able to go with my friends, so I thought I could give the nursing programme a chance. If it turned out not to be anything for me I could just drop out, but I got hooked on it. The best thing about the nursing profession is that I can be near to people and convey security and warmth in miserable situations, says Gunilla.

For many years now Gunilla has been working as a nurse anaesthetist at the Children’s Operation Department at the Astrid Lindgren Hospital in Stockholm, and her goal is to strengthen the nursing profession.

− Sometimes it can be difficult to reach out as a nurse, but it’s all about taking the profession seriously and showing that you know what you’re doing and are knowledgeable in your area. The training programme is a base, after which your journey begins, says Gunilla.

From the narcosis web to the children’s own healthcare guide

15 years ago Gunilla established Narkoswebben (the Narcosis web), a website where children and adults can become prepared for and learn about what it is like being at a hospital, and also learn more about what happens before, during and after anaesthesia and surgery.

− For children and young people to be given the same opportunities as us adults we have to involve them. It’s also about giving them space in our research, so that we can speak based on a child’s perspective and reach them, says Gunilla.

Today she is the project manager for producing a healthcare site for children, which is a national investment and a children’s equivalent to the adult healthcare site 1177.

In the limelight on the Honorary Doctor’s Day

During the Honorary Doctor’s Day on 23 April 2020 Gunilla, who was awarded an honorary doctorate in 2017, will be in the limelight. During the day she will for example give an inspirational lecture about everything being possible if you just have the courage to believe in and go for it – ”It always seems impossible until it´s done”.